Physically, they weren’t where they had planned to be.

“There are so many unknowns in the world globally,” Crispin Executive Creative Director David Day says. “We were supposed to be shooting this in Brazil. We’re now in Portugal.”

Like every other aspect of life around the world, the coronavirus is affecting Crispin’s work.

For starters, Portugal—which is 48th on the global ranking of coronavirus cases and deaths—is a safer place to shoot commercials than Brazil, which ranks second to the United States.

Changing location for a product shoot is one of myriad ways that the Crispin team has had to adapt activities during the pandemic.

But it’s not just the pandemic that’s driving the agency’s “modern” approach to advertising, which features a hybrid of live-action and self-filmed shots from around the world and stock video and photography. In Crispin’s lexicon, being modern also means loosening the creative process while simultaneously producing TV and digital content—virtually unheard of in the previous decade. It also means being authentic and real, traits that were visible in advertising before the pandemic.

Crispin would not disclose the name of the beverage client, whose global campaign in English, Spanish and Portuguese is scheduled to launch in late October or early November.

Apart from that, Day and Crispin Business Director Mark Boyd spoke in vivid terms about pandemic-era advertising. An equally important voice in this tale is stock footage company STALKR, which is sourcing material for the beverage company’s campaign.

STALKR curated and licensed the footage of athletes for Nike’s “You Can’t Stop Us” campaign, produced by Wieden+Kennedy, which is a source of inspiration for Boyd and Day.

“It’s amazing craft,” Boyd says of the way in which their competitor created match cuts, an editing technique where two different subjects are pieced together. In the Nike ad, Lebron James morphs into Megan Rapinoe, who completes his thought: they have the responsibility to make the world a better place.

Of his own agency’s work on behalf of the beverage company, Boyd says it’s a “very modern production.”

“It’s a culmination of live-action shots…combined with STALKR stock footage,” he says. “We did a creative approval for the overall approach, using almost exclusively STALKR footage but also some clips from films and that kind of thing. The final output is going to have stills, motion graphics in the right places; it will be very much mixed media.”

Heightening the client’s desire for authenticity are non-scripted influencers from around the world, who are creating memes, and members of a South African dance troupe, who are choreographing themselves. Pre-pandemic, a professional choreographer may have flown halfway around the world to teach and rehearse the moves; but here, the dancers are relying on Crispin’s creative brief and a music track chosen by the (undisclosed) commercial and feature film director.

In Portugal, Crispin filmed people enjoying the product, albeit in a socially distanced way.

“One of the reasons a lot of films are 100% live-action is for consistency,” Boyd says. “This revels in the opposite of that. It’s going to be more visually impactful and arresting because of the multisourced personality that it has.”

That this global campaign is in the works at all is a testament to the client’s versatility, Day says. Indeed, another client wanting a more traditional live-action shoot will not start production until next month.

“The scale to which the individual stories throughout the piece have gathered momentum is largely due to the fact that people have more time on their hands,” Day says. “They’ve been open to jumping in on a project like this. Things have snowballed.”

The director himself wrote one of the influencers on Instagram, something he likely would not have done pre-pandemic. But that’s what happens when people are isolated—they find ways to connect.

Day, who just completed his MFA from Goldsmith’s, University of London, is bringing his passion for conceptual art to the business world.

Even before the pandemic, STALKR was going to be a critical partner in creating the “lived-in look and feel reportage style,” Day says.

In his view, STALKR is the best stock footage company because the company’s researchers comb the internet for content that other companies cannot find.

“I had worked with STALKR three years ago and know of their research ability,” he says. “The Nike spot has confirmed their quality for me, especially the detail in terms of the match cut. The syncing of the two images flowing from one to another—you know instantly that that took some time.  You appreciate the time spent looking for the exact image, the exact emotion.”

Which brings us to Tom Henze, the Berlin-based executive producer at STALKR, which is based in Venice, Calif.

He’s been working for, or with, STALKR since 2008, when Radical Media used the company’s stock footage to produce the Nike “Courage” ad celebrating the 20th anniversary of the slogan “Just Do It.”

Henze, who was an assistant to the director on the project, says, “Nike ‘Courage’ is our manifesto for how playful an edit can become.”

The company’s freelance team of researchers—representing fields such as film, library science, and photography—were able to find 1,000 pieces of content for Crispin’s project. Much of it will never be published. In this sense, STALKR is embodying the visual equivalent of Hemingway’s Iceberg Theory (also known as theory of omission).

“If a writer of prose knows enough of what he is writing about he may omit things that he knows and the reader, if the writer is writing truly enough, will have a feeling of those things as strongly as though the writer had stated them,” Hemingway wrote in Death in the Afternoon. “The dignity of movement of an ice-berg is due to only one-eighth of it being above water. A writer who omits things because he does not know them only makes hollow places in his writing.”

Indeed, Henze echoes the writer’s philosophy as he explains his team’s process.

STALKR’s brief was to find imagery embodying “effortless cool with stylish realism,” Henze says. “It’s a mosaic of content. It’s a story of life, of making the story of life your story and being free of restrictions.

This article was originally posted in Velocitize.com by Sally-Ann O’Dowd 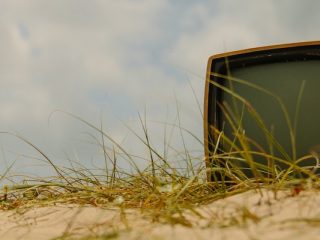 Previous Post (p) How to make TV, and advertising, that stands the test of time

Next Post (n) How can the marketing industry move the dial when it comes to more authentic representation in advertising?